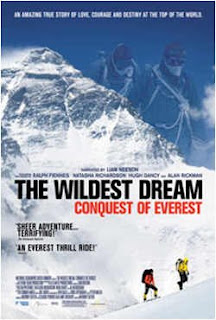 As I keep on mentioning to my climbing buddies in Smart about the film 'The Wildest Dream' the club decided to have a group film showing in one of their corporate board room. I lend them the cd that I bought through Amozon.
I always have fun times with the group, despite  watching this film for the third time it never bore me. It still gives me excitement and shivering thoughts of what the reality is up there where no human can function to its fullest due to the altitude.
The film also reminds me that we are just a minute object in this colossal place called universe especially on the highest mountain of the world. But at the same time the film also inspires me to keep on dreaming, and it gives me the chance to dream even by just being at EBC.
Posted by Curly Climber at 6:36 AM