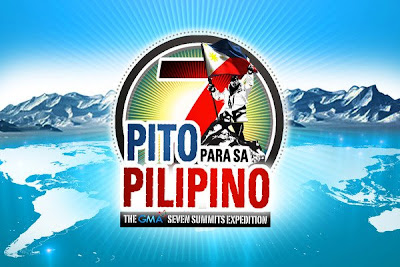 Romy Garduce, the very first Filipino to make it to the list of very few mountaineers in the world who reach the top and finish the 7 summits, actually 8. He is not the very first Filipino to reach the highest peak in the world, Mt. Everest,  but he continued his passion and love of climbing and mountaineering by slowly completing the list as years go by. I admire him for that, it just shows how he love the mountains and the challenge that goes with climbing each summit. I know each expedition entails so much courage and determination and being able to finish all of it is such a very big achievement. I salute him for that, he is such a great inspiration.

A coverage about his expedition is aired at GMA7, I am glad I am at home that weekend, not somewhere in the mountain range where electricity and the luxury of modern technology is not available. Lucky being just home, I keep in mind the air time and really excited to watch it.  An hour of show of almost a decade of expedition I know is not enough to cover everything, true enough what the production did was just a narration of how his early expedition went, what mountain goes first then what followed and so on. And it was his last expedition at Vinson Massif that has at least a detailed coverage especially on the higher camps. I can imagine how difficult it is to cover your expedition and at the same time struggle with the current situation especially up in the mountain where air is very thin and temperature is way beyond freezing, when all you can think of is conserve your energy just to reach the next campsite.

I can relate to his struggle up in the mountain, I can imagine how difficult it  is in all the 7, I want what he answered to the question how important is your gear, it's your life, he said. Because it is. He did not reach the summit on one of the 8 on first climb, he failed to reach Mt. Elbrus in his first attempt, and he came back for it. Though I feel like there should be more to what is being shown but of course what can an hour cover, not so much but nonetheless what is being covered is already very inspiring.

When I did Mt. Kilimanjaro before, it never dawned in my mind dreaming to do the 7 giant mountains, I did not even know that there is such a thing. As discussion among friends about it come and go, I never really thought about it at all. To my mind doing the seven giant mountains will only for the physically strong and for those financially able. Until I never know I am going on my second big mountain. But it was by an inspiration of a great friend who entice my thought of giving it a thought before my second big mountain climb happened. After that, I thought what could be a possible next. Ofcourse all of this will still depend if financial resources can be raised and technical skills can be learned. What a big dream for me which only God knows when and if it will happen.

RG, you show me that it can be done, thank you for being one of the inspiration.

Posted by Curly Climber at 4:46 PM