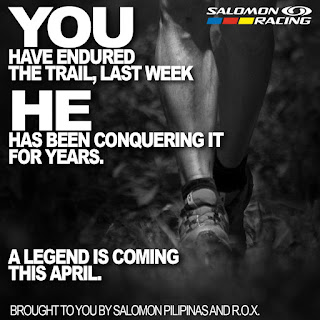 A week before my TNF100 ultra race, I was lucky and privileged enough that I got invited as part of the team that will join the Salomon International Athlete Iker Karrera and Salomon Brand Ambasador Edu Martinell to run with them on the trails of Tagaytay Highlands. It was on a weekday, Tuesday to be exact,  but without hesitation, I said go.

Actually, on all those events about their visit in the country that are open to us, I take the chance and opportunity to join. Early morning of Tuesday, I join the group of bloggers and media personnel that will cover this event in one bus that will bring us to Highlands, we will be joined with the two stars as well.

Looking at the participants who will join the run, I am among the few female and not fast runner. I am sure I will be among those who will run on the last among the pack. Upon arrival at Tagaytay, we are treated to a welcome drink and light meal prior to the short program with presentation by Edu and a question and answer portion. 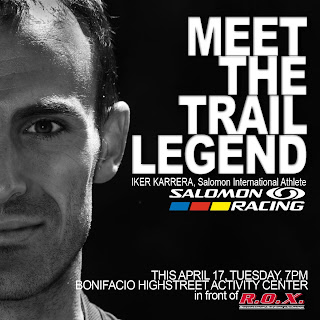 We are all excited to start the run.  I can't believe I will be running with one of the best ultra trail runner in the world. Retracing the Salomon route excites me as well. A week before my ultra race, I will have a chance to run one more time but I thought I should do it on a relax pace. I do not want to sprain any joints or strain any muscles on my legs. With just three days left, there wouldn't be enough time for me recover if something will happen.The group is lead by the resort's runners, they are the ones who set up the trail.

We started on the road then lead to a trail. I first position in front of the group,literally running with  the elite and fast runners, our very own Kian and Ige and of course the star of this event, Iker and Edu. After a short single trail, we are lead to a road again, which we are welcomed by the media people who decided not to run with us but rather ride the vehicle. Few more meters, I am now left at the back of the group, it's ok. This now leads to a familiar trail, the start of the Salomon trail that we used few weeks ago. Upon the uphill, I am now left behind, good thing my rock climbing friend Marie was there to run with me. I did not push harder to catch up with the rest of the group but I still catch up with them on the downhill, I still see the lead pack from a curve. I am not that far. Until they just run on speed, I decided to take my own sweet pace again. We ended running on different sub groups. The sun is getting higher, it's getting hotter, on the road that leads to the uphill route, the guide decides to ride the available ride. Not what I thought how our run will end but nonetheless it was sweet. The fact that I was able to run even that short is already heaven for me.

We come back to the hall of the resort, change and continue the media interview over lunch. We become part of the few runners interviewed as well and the sweetest of all, we have a chance to chat with Iker and Edu, precious moment. We head back to Manila for the rest of the day.

In the evening, there was a Meet and Greet at High Street,  at this time open to runners interested, I still join the event and give up my Tuesday adination session. The following day was a close presscon at ROX which I joined too. I told you, in whatever way that I can join them, I will. I just did not join the Baguio leg anymore for I go there late already. I just saw and chat with them right after I cross the finish line of the 100K distance of the TNF100 race. It's great to think that I ru the same trail that this great athletes run too. I may have done it longer and slower than how Iker did it but just a thought that he runs the same trail that I did already made trail running so inspiring. 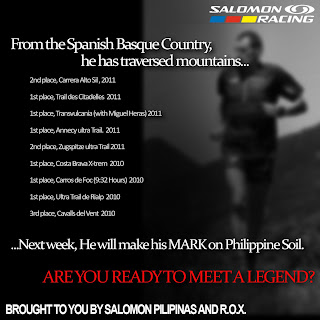 Here is an excerpt about Ike as posted by Alex. I just want to have a copy of it.

I was born and raised in a hamlet of Amezketa within Aralar Natural Park in the foothills of Mount Txindoki. Since childhood I have moved in the bush and always running, is where and how better I feel. Studied the career of Agricultural Eng...ineer. When studying the race started running asphalt racing, but when they began organizing mountain races in the area, I saw it was mine. I participated in some races, mountain marathons and was in the selection Basque mountain races. I like new challenges and let plantearme careers to devote more climbing and mountain climbing, until I returned to the ultra trails, because they felt it was a subject that had yet to be developed. I like the mountain in all its dimensions and increasingly people and cultures of mountain people interest me more. So far as I can collaborate with the Foundation Felix-Baltistan. Without doubt, the past 2011 Iker 'exploded' as an athlete, getting second place in the UTMB just behind Kilian. Story taken from Salomon Europe and Iker himself.