"Speed training for tonight", that's what I hear from our team leader Zaldy.

But much as I wanted to take the speed training on today's session, I have an ultra run this Saturday, I do not want to exert so much effort on my speed at this close to the race,  as I am now on my tapering. So I beg off doing the speed training and proceed to endurance run instead. But alas, it's 10 rounds of the 1.2kilometer  outer part of the triangle. A distance of 12 kilometers of the 10 lapses on the park, how is that, I need my patience to be around. I haven't done this before, I'd rather do a long distance run on a long stretch of distance than doing it several lapses on one place. Only one of my running friend is around, all my kikay friends did not show up tonight.  I miss them on this session. 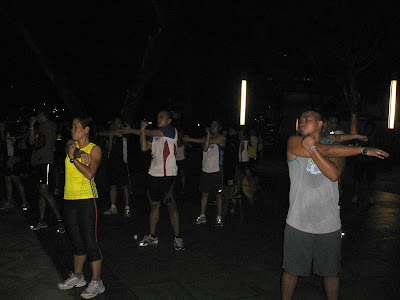 Of course, I did it, and I did it seriously. Maintaining my pace, not a fast one though but faster than my normal one. I noticed few male runners ahead of me doing the same ten rounds but after my 5th round, they are out of my sight already. I know there are several runners behind me doing the same route too, but I did not notice them even up to my last round. Probably they run ahead of me on the few rounds without me noticing it. And I wonder what could be those runners of the speed training doing. I love to do that as well, it's one of my goal joining this clinique, but I do not see myself doing it on the next three weeks due to my three ultra runs coming. 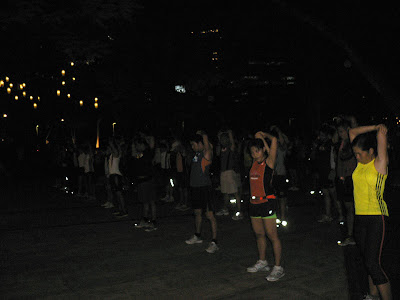 I was running pretty ok. I just have to be extra careful on the uneven parts of the paved sidewalk that served as our running route, running on the grass on the side when having the chance. Ayala Triangle is pretty crowded even after office hours. Commuters and runners alike share the same walk way, and even on the inner lane of the park. I just have to look ahead in order not to bump people approaching or other runners may bump me. 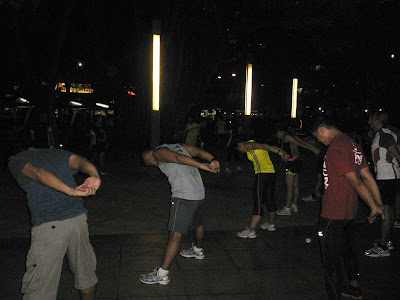 With my desire to finish earlier, I did not stop to hydrate. I just continue with my run, good thing it was not that hot, I was not sweating so much. Though towards the last few rounds it was very tempting to go get my hydration bottle. I was among the last few runners who finish last on this session. But I am happy I did it at a longer distance at the  middle of the central business district. I haven't done such distance for a long time now. Good work out after all. And there was bread offered to me at the end, having a bread at one hand while doing my cool down exercise. Nice. Thank you Ayala Triads.

Nice read about the basics of running: Running 101: How Often Do You Run?

All pictures courtesy of Ayala Triads
Posted by Curly Climber at 10:39 AM