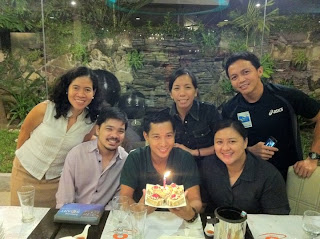 Not for me, but for my good friend Aaron. It's his birthday today, and few weeks ago Kim had been planning to throw a surprise dinner for him on the eve of his birthday. It will just be among intimate friends and his brothers. Luckily, I got invited and since Arvin will be coming, I will be riding with him from Makati area. The celebration will be at Timog, Quezon City . Aaron already had a birthday celebration is Rasver over the weekend, what was suppose to be a birthday climb, it got canceled and the group decided to bring all the food that is suppose to be for the climb at Aaron's place for a feast. They stayed until Sunday but unfortunately I was not around. I just arrived from Baguio which I did not know that they had a celebration. 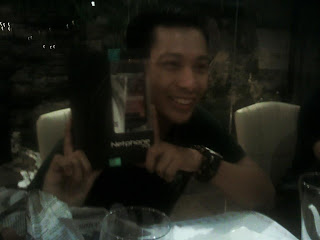 I was thinking probably one celebration will be enough and no more surprise dinner. Just as I was thinking that, I receive a text from Arvin, reminding us to make sure that Aaron will be there. He doesn't want to be the one surprised instead of the celebrant. A confirmation from Kim was assured, we will meet 7:30 at Spice 8, a Thai Restaurant. Jepoy was just really good in making excuse that it's going to be a client meeting, just when Bugsy and Kim are already in the restaurant, to their surprise Aaaron already arrive, earlier than expected. Without hint at first he thought, a client meeting, with Bugsy and Kim? Until he realized it was a dinner with friends. We came in late, it was so traffic.
The group enjoyed over a good Thai food, not the best  taste though but good enough. We ended with a dessert com cake which Aaron blew the candle first before we shared it among us. We waited until 12:00 midnight before we head home. That was a good celebration of another year of a good friend.

And that did not end there, on the day itself together with the celebrant we watched a football game of Azkals virsus Nepal. This is my second time watching them play and it's always fun. It was a great game, having the Philippine Team win over Nepal by 4-0 score. It always give so much joy seeing them play.

After the game we had our final birthday celebration at Kenny Rogers, our sort of dinner care off Arvin, Aaron's brother.
Posted by Curly Climber at 3:26 PM