The Cloud People of Peru

I wonder if this will be part of  the trip if ever it will really happen. 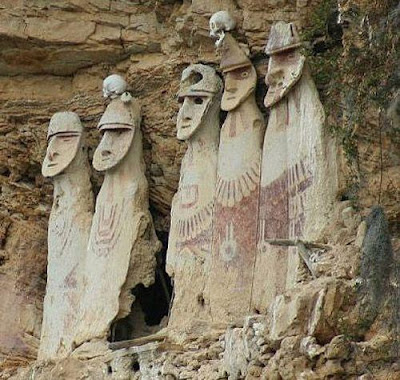 The Chachapoyas, also called the Warriors of the Clouds, were an Andean people living in the cloud forests of the Amazonas region of present-day Peru.The Incas conquered their civilization shortly before the arrival of the Spanish in Peru. When the Spanish arrived in Peru in the 16th century, the Chachapoyas were one of the many nations ruled by the Inca Empire.

Their incorporation into the Inca Empire had not been easy, due to their constant resistance to the Inca troops.The name Chachapoya is in fact the name that was given to this culture by the Inca; the name that these people may have actually used to refer to themselves is not known.Chachapoyan constructions may date to the 9th or 10th century; this architectural tradition still thrived at the time of the arrival of the Spanish until the latter part of the 16th century.

To be sure, the Incas introduced their own style after conquering the Chachapoyas, such as in the case of the ruins of Cochabamba in the district of Leimebamba.The Chachapoyas people built the great fortress of Kuélap, with more than four hundred interior buildings and massive exterior stone walls reaching upwards of 60 feet in height, possibly to defend against the Huari around 800 AD. Referred to as the 'Machu Picchu of the north,' Kuélap receives few visitors due to its remote location.

As posted by Planet Earth Phenomenon at FB page

Posted by Curly Climber at 6:20 PM