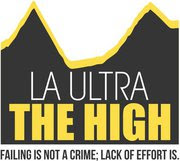 No, the event is not soon, it will be this coming August 2, 2012 yet at Leh, Ladakh, India. And no I won't be running the ultra race, I will be part of the support crew but I am allowed to run a shorter distance 6 days prior to the ultra race, I decided to join the full marathon (42K).

The list of participants for La Ultra - The High has been released by the organizer Rajat Chauchan today. And as I go along the list I look first the name of my friend whom I will be supporting, Seow Kong Ng. The list includes not just the names but their achievement as ultrarunners as well. Seeing Seow's achievement really makes me so proud of being part of his crew team. All the more I am motivated to practice and prepare for the event.

But as I go along the list of each individual coming from different parts of  world, all the more I got so excited and thankful and grateful for being part of this event. Having to be with the best and extra ordinary athletes in the world  who achieve so much in ultra running  makes me so excited , one of them is a 7 summit finisher from Greece. And one thing more, Sudip will be around. This is going to be fun....yahoo.... I can say I am so blessed. Thank you Seow Kong and thank God.

Below is the list as copied from the site of La Ultra - The High.

Participants for 2012 edition of La Utra - The High

To be considered for this event, the first  thing we are looking for is not to get participants killed. We look for people who respect for nature, these monstrous but beautiful mountains and people around them, not simply studs. And of course, have the potential to finish this run. Yes, that's the last criteria, not the first.
To us, every participant who makes it to the start is a WINNER. As Border Road Organization, the guys who maintain these high roads say, 'Failing is not a crime; lack of effort is.'

We planned to give away trophies, not medals or belt buckles, to all the participants at the start line. But non-finishers of the first edition, Bill Andrew and Molly Sheridan, wanted to 'earn' the beautiful trophy. Molly earned her trophy during the 2nd edition. Bill is coming again for his.

Good luck to all you common normal beings (most would not disagree with this), who are putting in the effort to do achieve an extra ordinary feat.