Cesar Guarin has been an old fixture in the local running scene as he first emerged during the first running boom of the late 70s. When i started to take up running during the early 80s, he was already in the limelight, running in various local races until he set to run his first of many ultra running feats starting with the Trans-Pilipinas Ultramarathon, covering a total of 2, 251 kms from Zamboanga City to Baguio City which he did in 37 days.


Considered the “Father of Ultramarathon”  in the Philippines, he is now set to conquer another 30,000 kilometers across the world in the Global Run: Takbong Alay sa Pilipino at sa Buong Mundo.  Guarin is undertaking this near-impossible feat to pay personal tribute to Overseas Filipino Workers (OFW).

Likewise, Guarin is dedicating his global run to Filipino street children, raising funds to help them through his group’s “Batang Pangarap” program. Guarin’s group teamed up with Overseas Filipino communities and various agencies to get underprivileged kids into running, and provide them with their basic needs and social development programs.

Backing Guarin on his worthwhile quest is the Philippines’ leading low-cost carrier, Cebu Pacific. In a special event held recently at the Xin Tian Di of the Crowne Plaza Hotel, the airline expressed its full support to the man known as the “father of ultra-marathon” in the country. 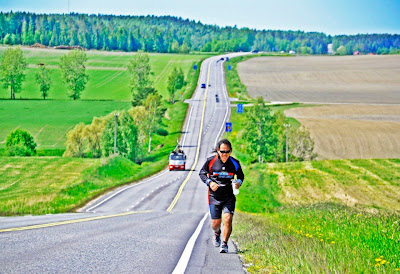 “Cesar Guarin is very inspirational. He is trying to do something that no Filipino has ever done before, which is to run around the world, the equivalent of a thousand marathons,” said Alex Reyes, general manager of the Cebu Pacific Long Haul Division. “He’s also reaching out to all the OFW communities in the countries that he’s visiting, reaching out and bringing a little bit of home to them.” 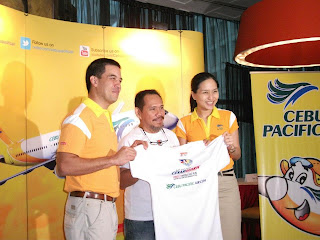 Reyes also expressed that not only is Guarin’s cause a worthy endeavor to support, his global run is aligned with Cebu Pacific’s core mission, which is to serve the Filipino overseas communities. “Today there is no Filipino carrier that flies to the Middle East.  We’ve chosen Dubai as our first long-haul destination to cater to Filipinos based there,” he said. “By making fares so much more affordable, OFWs can come home much more often or their families can visit them there.” 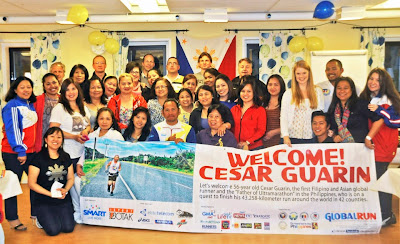 “Through Cebu Pacific’s low-fare, great-value service, we hope that there will be more frequent reunions for overseas Pinoys and their families,” Reyes added.

Guarin’s goal to circumnavigate the world on foot started with a dream: he wanted to be the first Filipino to bring home the Olympic gold marathon medal. After failing to qualify for the 1980 Moscow Olympics because of an injury, he channeled his frustrations to completing the Trans Pilipinas Run, covering 2,251 kilometers from Zamboanga to Baguio in 1983.

Guarin followed this achievement with the Trans USA Run in 1985, running across 14 states in 48 days non-stop, from Mondays to Sundays, literally from the east to the west coast.


These ultra-distance runs gave him the training he wanted, and improved his strength and endurance. He joined the 1988 Seoul Olympic Games, but was again thwarted by an injury. Rather than feel defeated, Guarin persisted on and was back on his feet by 1992.


He set out for the Trans Europe Run, covering a distance of 3,756 kilometers from Barcelona to Rome in 67 days. His Europe run was filled with challenges. Their corporate sponsor backed out at the last minute and they had to improvise using a mountain bike instead of a support vehicle. His long-time friend George Tan had to carry 50 kilos of supplies across 6 mountainous European countries for two months on bike.

Now 57 years old, Guarin continues to challenge himself and is determined to conquer the rest of the world. His next stop, the Middle East, is seventh of his 15-stage worldwide run. While the tough weather conditions and rough terrains may intimidate regular runners, Guarin considers them part of the challenge and is looking forward to the adventure that awaits him.

Guarin will now embark on his Middle East Run challenge, referred to as “the toughest extreme distance run” among Cesar’s 16 stages of his global run. To finish this ultra-marathon  Cesar will have to complete the total distance in 6 countries in the Middle East (UAE, Oman, Bahrain, Qatar, Saudi Arabia and Kuwait).

Next stop, the Middle East


The runs will be on desert roads and around an oval course in regions or areas where road running is prohibited or illegal. At 1,265 kilometers, it’s going to be a challenging run, which may take 40 or more days to complete.

Global Run Middle East will surely be one of the most memorable and exciting global run stage that Cesar and his team will venture. For Cesar Guarin, global running is an incredible life changing experience where he challenges himself against some of the most rugged and beautiful landscapes in the world. Once he finished this run he will be the first person to have run an ultramarathon of this magnitude in the Middle East.

Yours truly with the man himself

“I’m happy that Cebu Pacific is backing this global run. This started as a very personal project, so I’m really delighted that we’re getting more support,” said Guarin. “Choosing Dubai as one of their first long-haul destinations and offering low fares show that Cebu Pacific, like me, is a supporter of Global Filipinos,” he added.
Posted by Curly Climber at 10:33 AM