A Weekend before the Hundred Mile

Saturday on the weekend before my Hardcore 100 mile race, have been blessed with friends who are also into trail running, the group decided to head to Pico de Loro, an answer to my much needed run up on the mountain. It may not be that high but at least it will give additional stretch to my muscles that has not been fully  awakened from the short road runs that I had been doing the past weeks.

The distance is not that long either. It was hot and humid, the trail is dry, dusty and compact that obviously become muddy if it rains. The cloudless day gives a clear blues skies to the runners and hikers alike. The trail that pass through the trees has been shaded, a refuge to the runners.


Clear blue skies on a cloudless day at Pico de Loro.The run lasted only over three hours of out and back but it was a sweet one.

The following day, Sunday, I am back to my original playground, the busy streets of the Metro. Started my run by joining a 5km fun run which I ranked 5th among the female contenders, after a short break I resume my running tracing the original 5km route earlier and go beyond. It is already hot, I share the road with few runners and vehicles alike. 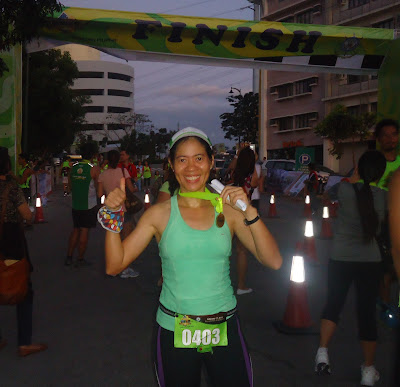 What I originally plan to be just a short one as I move further down the road I did not realize I went much longer distance. I was just enjoying the feeling of running all by myself which was a good simulation of my most possible situation come race day. I thought there will be more hours of being alone running a hundred mile, so I might as well enjoy every moment of it as early as now. I end the day running almost 30km, that serves as my LSD for my coming race.

I arrive home recharged and full of energy. I never felt so much energized and stronger than now, and more confident and ready to face the challenge on the race day. So much excited now.

Time to taper, get enough rest and sleep, eat more, drink and hydrate and prepare the gear for the big day.

Posted by Curly Climber at 6:44 AM