K2 - Siren of the Himalayas

The Story
“K2: Siren of the Himalayas” is a documentary film following three climbers as our team attempts to summit the world’s second highest peak, K2. 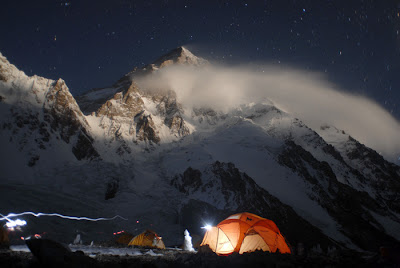 Shot in Pakistan during the summer of 2009, our journey coincided with the 100th anniversary of the Duke of Abruzzi’s historic 1909 expedition. As we retrace the Abruzzi route taken in 1909, the film examines the history and geography of the Karakoram mountains while contemplating the risks, rewards and personal nature of exploration in an age when there are few blank spots left on the map. 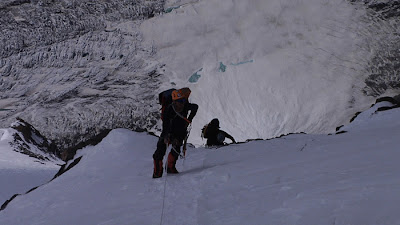 K2 is one of the world's most dangerous and challenging peaks.  For every four people who have reached the summit, one person has died trying. K2 is steeper, more precarious and more technically demanding than the well-traveled Mount Everest, and films about K2 are few and far between compared to its slightly taller counterpart.

Backer Support
Our goal is to raise $5,000 from Backers to help pay for post-production costs. We have already spent about $25,000 on the film so far, and we need about another $15,000 to complete a final product. Remember, we only get to keep our Backers' generous contributions if we reach our Kickstarter goal, so we're keeping it low enough to hit at $5,000 while also covering some extremely important post-production costs!

Here's how you can help!  We've broken down our remaining costs into the following categories:
- 16mm film processing and video transfer ($2,000)
- Licensing 1909 Footage ($3,600 for 3 minutes)
- Licensing 1909 photographs ($1,200 for 6 photos)
- Licensing Music ($3,000)
- Graphics and Maps ($2,000)
- Color Correction ($1,200)
- Audio Mix and Master ($1,000)
- Output to tape ($1,000)
We've partnered with Webby and Emmy® Award-winning director Jason Reid and his production team to help edit and produce the final feature cut of the film. Most of it was shot with HD video cameras, but we also shot more than two hours of beautiful 16mm film on K2.  Our initial fundraising goal of $5,000 will go a long way to help cover video transfer, footage licensing and graphics.
We've also set up some great prizes to say "Thank You" to our Backers for supporting this project! Check them out on the right side of this page.

The Goal
Help our project reach the audience it deserves by becoming an official Backer!  We hope to hit our goal of $5,000 so we can finish the film and get it out to a worldwide audience this year.
Visit ursusfilms.com.

THANKS SO MUCH FOR YOUR SUPPORT!

Dave Ohlson and the "K2: Siren of the Himalayas" team

Posted by Curly Climber at 3:09 PM